Oh, to go to Trader Joe’s again. Woe, woe is me…I used to live in Los Angeles before I moved back to the Midwest, but that is another story that has very little to do with food. I miss Trader Joe’s. I did most of my food shopping there and at that time I was not vegan, almost or otherwise.

Now, when I really need a Trader Joe’s within 5 minutes of me because I am almost vegan, the closest one is about a 3 hour drive away. Rats.
I got the bug for Trader Joe’s again from a comment I received from a very interesting blogger. She posted with the name Akemi and her website is http://www.cosmiconion.com. It is relatively new, like my own and she has some pretty funny bits going about eHarmony dating. She recommends Trader Joe’s vegan cookies, they come very Trader Joe’s appropriate in a paper bag, and she has tried the chocolate chip and oatmeal chocolate chip.
I looked at Trader Joe’s website through my new vegan eyes and drooled. They have some good stuff and I love them because they are always really cheap. The stores in CA have more vegan stuff, of course. I was able to download their list of soy products (they don’t have a list of vegan products) and it looked like they had some things I can’t get anywhere else and would love to try like Trader Joe’s Vegan Pad Thai with Tofu and Trader Joe’s eggless egg salad, to name a couple. Here’s the PDF’s of both the East/Midwest and the West Coast Trader Joe’s soy offerings.

East West
Or just go to the Trader Joe’s website yourself and look around. I love their Monty Python-like images and sense of humor. You’ll be able to find a store near you (hopefully) on their site.
Trader Joe’s also has the best dried fruit section I have ever seen in my life, and priced so you can buy some of it. Great nuts. If you want some wine, this is the place to go. I used to get good Merlot for under $5 and French Cabernet for less than that. I’d also pick up the Trader Joe’s Midsummer’s Night Moisturizer for around $3 (its actually Nature’s Gate which I have to pay $6 for).
That tears it! I’m going to the airport right now and hop a plane to my old Trader Joe’s in Los Feliz, CA. Think of all the money I’ll save!

Pie is a great thing. It can be made vegan so easily I wonder why anyone ever makes a non-vegan fruit pie, but that’s just me. It is much cheaper to make a vegan pie crust than a non-vegan pie crust, just as easy and just as good. It may sound like a lot of work to make a pie from scratch, but it is so worth it, there is nothing better than a homemade pie. Nothing! 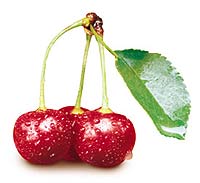 As I write this, I have my first fruit pie of the summer baking in the oven. I happened upon some tart cherries at a fruit stand not far from my house. I live in what they call the “fruit belt” in Southwestern Michigan, not far from the lake so we get plenty of rain and snow. Many of my neighbors are farmers, but I am not.

Now I must admit I don’t normally make cherry pie, in fact this is my very first one. I usually don’t find tart cherries, but I saw them at the fruit stand and it is still a little early in the season for anything but strawberries, which I don’t bake, so I got them. I usually make blueberry, peach, apple. I make a lot of blueberry pies because I live surrounded by blueberry farms. I actually can walk a very short distance and be in a farmer’s field picking enough blueberries for a pie or two and walk home before he even realized I was there. Now I don’t do this, mostly because once when I was young I was in his field on my mini-bike and he shot at me with what I think was buckshot. He missed.

Now I go to his farm and buy them. I get 5 pounds of blueberries for $6.00. I have never mentioned the time he shot at me. I wonder if he remembers, I don’t think he was close enough to know it was me, but who knows.

Oh my. I was in Chicago, on the North Shore actually, and I ran across this Dean & Deluca Marinara Sauce. Well if you have a bit too much money and want a really, really good pasta sauce, try this.

Yeow, I couldn’t believe it was so good, but I think it cost like $10.00 a jar. I can’t be sure because they didn’t have a price on it and I didn’t pay for it. If I’d had to I’m sure I wouldn’t have gone for it, but rich friends were doing the shopping.
If you are in a very upscale grocery store with some very rich friends and happen upon this stuff, try it.

Or I have the Dean & Deluca website to click on. On their site it’s only $24 for all three different kinds of sauce, Marinara, Arrabiata, Puttanesca. I don’t know if anything but the Marinara is actually vegan, and I don’t know if they would substitute three of one kind instead of one of all three kinds. You can send them an email and ask, for $24 they should do a little dance for you too, but this sauce is actually so incredibly good, they don’t have to.

Danielle says she thought, before reading about the Alternative Baking Company cookies, that Liz Lovely made the best vegan cookies.

Cowboy Cookies
The Cowboy Cookie is the pick of the herd. Hearty oatmeal, chocolate chip cookies just loaded with chocolate chips and walnuts chunks coated generously on the bottom and decorated on top with rich, dark chocolate.

Well, I had to check the source of her post and found a really funny and insightful blog called joeparadox.com.

A really cool school teacher’s view of the world.

I found these French Twists by Barry’s Bakery today at Wal-Mart and thought I’d try them. They have no dairy, no butter, no eggs – vegan. Hey, I hope you’ll give me a break for shopping at Wal-Mart, I know they’re evil and all, but I live out in the middle of nowhere and it is the only store around that has anything. Anyway, these Twists come in a number of flavors. I got the California Almond, which I scanned in for the picture to the left because they are gone already. Not too bad, a little almond extracty tasting, but if you like that, great. I have started on the next bag I got which is Maple French Toast. I like those a lot.
There are also Chocolate Chip, Cafe Mocha, both of which they didn’t have at Wal-Mart or I would have gotten them, Wild Raspberry and Original – cinnamon flavor, which they had but I passed on, and key lime which they also didn’t have, but I wonder if I would have bought those.
They are crunchy fried layers of puff pastry and I suppose that is why they are gone already. Not as good as cuties, but good enough to munch on.

Yogurt??? Well not exactly, but close enough to always make me happy. WholeSoy is thicker and creamier than Silk, and it doesn’t get watery if you leave it in the fridge a few days. Best of all its completely vegan.

They also make drinkable Cultured Soy. I like this too, I don’t drink it too much and it is a little thick. I usually would rather make my own smoothies.
If you have never had soy yogurt, or you have not tried WholeSoy and are stuck on another brand, give it a try and let me know what you think.

I sometimes wonder if I am the only one who loves stewed tomatoes as much as I do, because I don’t know anyone else who feels quite the same about them. I think they must have a bad rap, because they are in fact really great. I use them often in recipes like sautes, chili, soups.

This recipe is actually a number of different recipes. Instead of the steak strips use vegetables like broccoli, beans, cauliflower, asparagus, zucchini, and yellow squash. One or any combination is great. The trick is to saute some veggies or in this version those Lightlife Smart Menu Steak Strips and vegetables, then when they are properly singed toss in the stewed tomatoes and spoon over pasta. The stewed tomatoes supply a nice thin sauce that is extremely tasty. Give it a try, it only takes a few minutes to make.
You can make this recipe completely vegan by using Vegan Parmesan Alternative. This parmesan cheese does have a soy-ee taste to it, I won’t lie to you. If you haven’t tried it before you probably will notice it and for me, it took some getting used to.
Although my cat Scout loves it, and she is not vegan.

Yes, you can bake vegan. How? Use Ener-G Egg Replacer instead of eggs and soy margarine instead of butter. You can’t taste the difference in this recipe.
Ener-G Website – Purchase Online

I use this egg replacer all the time, in carrot cake, chocolate cake, and cookies. I take regular recipes and then “veganize” them. Not always 100% successfully, Ener-G even says on the box to try it and see. It will work in some recipes and you may have to vary the amounts and ingredients in others. Like my carrot cake, I add a little corn, un-called for, starch to hold it all together. The first one I made fell apart, but I got it now. (carrot cake recipe to come) These oatmeal-raisin cookies will get you started and only replacing one egg is pretty safe. It’s the recipes that call for 4-5 eggs that are scary.

Bagels are vegan legal, well most of them anyway. Yum, I love them, but I love bagels with cream cheese and that’s the way I have ’em.

This Tofutti Better Than Cream Cheese is just that, better. I think it is as close to the real thing as you can get, closer than imaginable. I am always surprised at just how good it is. Maybe real cream cheese is just a tad bit more sour, just a bit, but that is as much criticism as I can give this stuff.
If you have not tried Tofutti Better Than Cream Cheese, you absolutely must. The plain is great and it comes in flavors.
Available in most health food stores.

Having a hankering for some steak? I have not always been a vegan and I watched a number of family members chow some really thick steaks Memorial Day Weekend. Now I was strong then, but it started to get to me after a while so I made this recipe with Lightlife Steak-Style Strips.

It’s not real porterhouse or anything, but I do love these steak strips in all sorts of recipes. They have a nice seasoning on them and chew like steak. Uncanny really. They are also packed with protein, just like the real thing.

I get the steak strips at my Wal-Mart superstore, but the gravy I used for this particular recipe should be available in most good health food stores.